This week the pancake printer got some attention other than from our robotics class. WGAL’s Lori Burkholder, and a reporter from the York Daily Record came by and talked with each of us about our projects and how each of them started. Lori Burkholder said she would email our teacher when our story would be aired so we are all excited about that. As far as the York Daily Record, if you look back on a later post from our teacher you will see our video interview with the reporter. END_OF_DOCUMENT_TOKEN_TO_BE_REPLACED

Last weekend Colt and I, (with some help from Emily) we decided that we would go to our school’s robotics competition. This competition is for Vex robots and not so much like our robotics course. Congratulations and well done to the competitors that had competed. Taking the printer to this competition and showing people there what we have been working on really seemed to catch everyone’s attention. That or they were just hungry for pancakes. END_OF_DOCUMENT_TOKEN_TO_BE_REPLACED

Whether it be more water or more mix it has become apparent that a perfect pancake batter simply cannot exist. With plans to show up at a robotics competition, our school’s hosting, and show the pancake printer off, Casey and I relentlessly attempted to find a batter that possessed the ideal consistency. Along with that, we needed a more suitable batter delivery system.

END_OF_DOCUMENT_TOKEN_TO_BE_REPLACED

This week with the pancake maker we have experimented with a lot of batter and many ideas. We were finding that our original bottle for our printer was too big of a hole for the batter and so it would just easily flow out and was not what we wanted. So we thought about what would be best to use that has a small hole at the end and will also stop whatever is inside it from flowing, and that is when we thought of a baby bottle.  END_OF_DOCUMENT_TOKEN_TO_BE_REPLACED

This week  we worked on neatening the printer up and had the great pleasure of meeting Mr. Donald Dagen  of Thaddeus Stephens School of technology 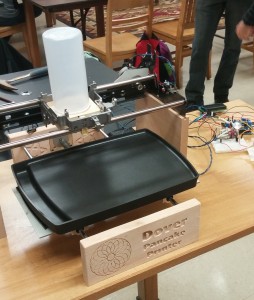 END_OF_DOCUMENT_TOKEN_TO_BE_REPLACED

and, the finished parts… 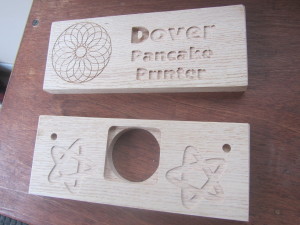 Quick update on weekly posts, we have decided that from now on that we will create one new post the discusses everything that we have done over the week rather than two separate ones that give half and half.

This week with the pancake printer we got to work right away to put more together with the Y component and how the batter bottle will be held while pouring the batter. END_OF_DOCUMENT_TOKEN_TO_BE_REPLACED

The Pancake Printer needed a custom wood part, so we went to the CNC router.  Here it is… 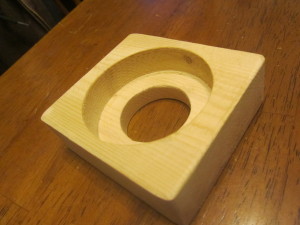 This week, my partner having nearly completed the “zero” function, I took to more of the hardware side of things.  In order for “zero”, our last big function, to work a limit switch is mounted to each axis (Y and X). the program will then utilize the switches by sending the header towards its axis’ limit switch till it presses the switch. As the switch is pressed a high signal is sent to pin 1 and the program sends the header back out to the middle of the skillet, Following this action a similar process will take place to move the skillet to a set zero point.  Attaching the switch was a feat in itself as its position was perpendicular to the metal it was to be mounted to. I fashioned a part made of some scrap steel that i cleaned up. To mount the switch two holes were drilled for the switch to attach to the metal piece, and two, one for each screw, to attach the metal to the metal frame of the y axis.

to follow up on the U/I, user interface , the new ‘LCD backpack’ unit  arrived earlier this week and was promptly installed. The U/I is now fully functional and directly controls the printer.

This week was a back and forth process but in the end I believe that we have made progress. Right away on Monday while my partner worked on getting the LCD display to work properly with the potentiometers I finished END_OF_DOCUMENT_TOKEN_TO_BE_REPLACED