After a few setbacks caused by the rotary switch and the overheating Pi, everything is finally soldered and in place, and the tic tac toe robot can live up to its name once again.  Here are a few pictures of what the new layout looks like. END_OF_DOCUMENT_TOKEN_TO_BE_REPLACED

This week I finished up soldering the screw terminals, and I soldered wires for the servo motor and one stepper motor.  I also drilled a hole in the box and mounted the button.  Hopefully the new layout will be finished soon.  However, I did face a setback this week due to the Raspberry Pi’s heating issue.
END_OF_DOCUMENT_TOKEN_TO_BE_REPLACED

This week I drilled holes in the box and laid out all the components inside it.  Everything fits well, but longer wires will be needed for the stepper and servo motors.  I have also begun soldering screw terminals onto a separate PC board, which will make the connections from the motors to the Pi easier to change if necessary.  In addition, I also decided it would be helpful to add a fan to keep the Raspberry Pi cool.  It has been running especially hot lately, and putting it in a confined space will only make matters worse. END_OF_DOCUMENT_TOKEN_TO_BE_REPLACED

This week I took apart the components for the robot and soldered the jumpers and a screw terminal to a PC board.  The screw terminal will allow for greater flexibility of how long the wires to the button are, so it can be moved around easily if necessary.  Mr. Bahn also found a box that will house the parts once we drill holes for the wires.  Finally, I was about to test a potentiometer to be used as a difficulty knob, but I learned that the Raspberry Pi has no analog pins.  So I began researching analog to digital converters, which will be necessary in order to receive input from the knob.

The robot was previously not very nice to look at, with the Raspberry Pi, motor driver, two power supplies, and countless wires all making a big mess.  Now that the robot is able to play a game of tic tac toe, I have begun working on its final layout.  It will have one power supply that can output two different voltages, and is smaller than the old ones.  In addition, all the components will be stored in a compartment under the clipboard to keep them out of sight.  I will also solder all the wires which were on the breadboard.  I would like to add a few more features to the robot, and once this is done, it would make any future programming much easier than before.

Last week, the robot played its first game.  However, there were still some features that were needed, and others that I simply wanted.  It now draws a line through the winning spaces after it makes a winning move.  In addition, whether it was player 1 or 2 used to be determined by a line of code in the program, and this had to be changed manually between games.  However, now it can decide for itself if it should go first or second by looking at the board at the start of the game. END_OF_DOCUMENT_TOKEN_TO_BE_REPLACED

This week, I was finally able to put my work on the camera and arm together, and I played a game against the robot.  It is not yet working perfectly, as it sometimes draws on top of another shape or fails to move the marker down to the paper.  However, it usually performs well, and I expect I will be able to overcome these issues soon.  Below is a video of the arm playing a game perfectly.

END_OF_DOCUMENT_TOKEN_TO_BE_REPLACED

This week I worked on making the arm and marker lifting mechanism work together.  I was able to create a working version, but it was not yet finished, as there were still some changes to be made on the arm.  A new one was created with shorter arms, a larger base, and the servo motor above the marker instead of below it.  After putting this together, there was a small issue with the stepper motors jumping around rather than moving smoothly.  I plan to fine-tune this starting next week.

After mounting the floppy mass device onto the end of the arm, many problems became apparent.  It is at times unreliable and unpredictable, and placing the servo and mass at the correct position is difficult.  And not only that, it admittedly looked pretty dumb. 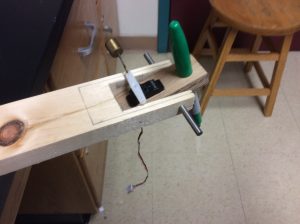 END_OF_DOCUMENT_TOKEN_TO_BE_REPLACED

This week I focused on how I would lift the marker off the paper.  I began by looking into the magnet method I mentioned in my last post, but in the end this proved to be more trouble than it was worth.  My next attempt was the “floppy mass method.” END_OF_DOCUMENT_TOKEN_TO_BE_REPLACED