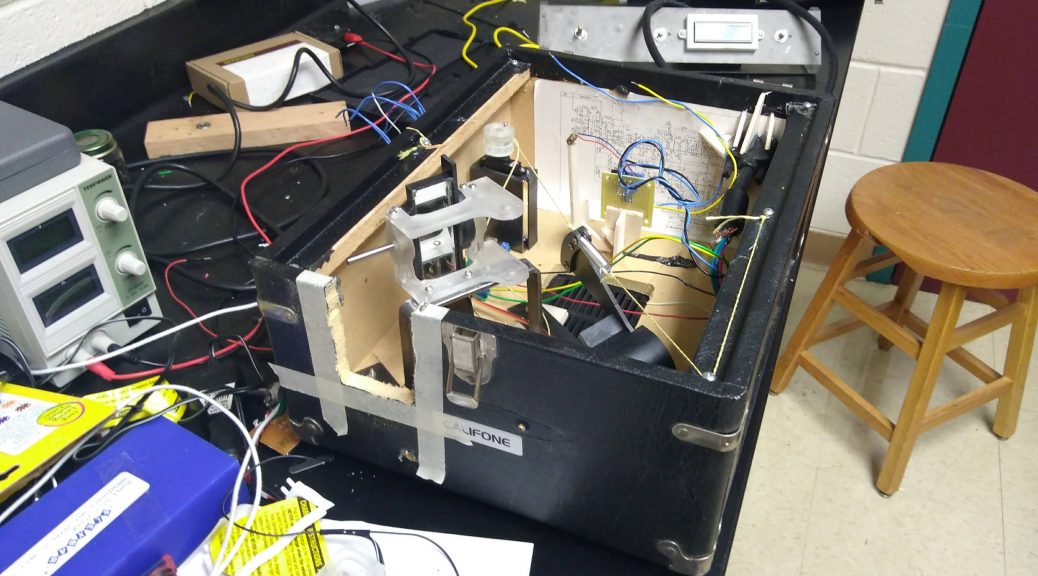 In the past two weeks I worked on finishing up all the systems and mounting them in the box. The last system I had to complete was the laser power control. This system was simply Mosfet transistor with the gate connected to the arduino PWM pin, the drain connected to the cathode of the Laser diode and the source connected to the ground of the power supply. 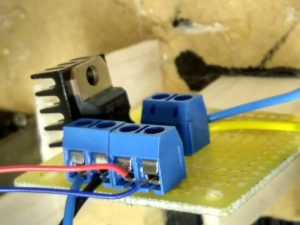 This was the last electronic system I had to create, and after this was done I could start mounting the systems in my box. 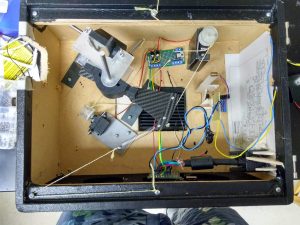 Unfortunately, I did not figure out the optics for the 5W laser yet, so for now I have a red visible laser installed.

In the next week (the last week of school) I will epoxy together all the parts that need it for the final assembly.

Overall I had alot of fun working on my project. END_OF_DOCUMENT_TOKEN_TO_BE_REPLACED

The last week I’m just planning on trying to install the hardware like the lock and buttons. And making sure my code has no errors. 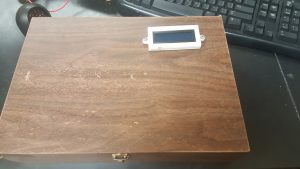 This week, I started with a huge hunk of wood that weighed 400 grams. We realized that this was not going to work as the robot struggled and screamed trying to move the mass. Thus, Mr. Bahn and I went to the woodshop and took as much unnecessary wood off as possible. This got the mass down to 250 grams, which wasn’t terrible, but was still a little difficult to move. Below is a picture of the streamlined body. 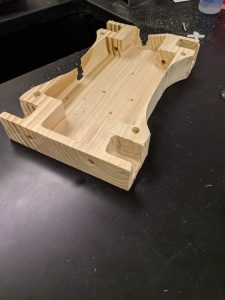 After noticing that this still wasn’t quite working, we realized that another material may be needed. We had a block of insulation foam that we had been using to avoid sitting on the cold floor while working, so Mr. Bahn decided it was a good idea to re-purpose the foam into a new body. After doing so, the new body weighs 27 grams, and the robot was able to move happily along at 0.02 MPH. We also made a stand up and lay down function that slowly bring the robot up from a stationary position. Our goal by the end of the day was to get it going 10 times faster at least. First, we changed the order of the legs to change the way weight is shifted as legs move. This helped a good amount to get a stable walk. After changing variables slowly and singularly, we eventually got the robot to walk at 0.12 MPH. Unfortunately, one of the knee servos decided to call it quits and we were not able to do any further testing. Below is a picture of the current body with all electronics and servos. 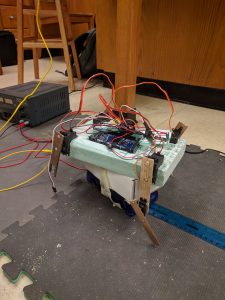 Moving forward, I hope to work over the summer. I would like to present my project at MakerFair, and I want it to be better than it is right now. My first goal will be to remake the legs, but fit a new knee servo since the knee is always the failure point. I think I have begun to push the limit of size, and I would like to see how far I can go. 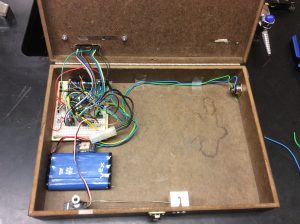 we didn’t have much time this week to work but I have included a countdown after you set the location until it locks. I have also secured my arduino and battery down with Velcro.  My box is now ready for field testing to see if it holds up and if I need anymore prompts to aid the user in the game.

This week I am starting to install my circuit in the box. I have put extention jumpers on my LCD so that I can attach it to the lid of my box. I also plan on drilling a hole in the side so that I can still directly plug it into the computer if needed. 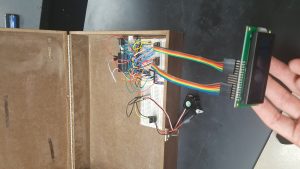 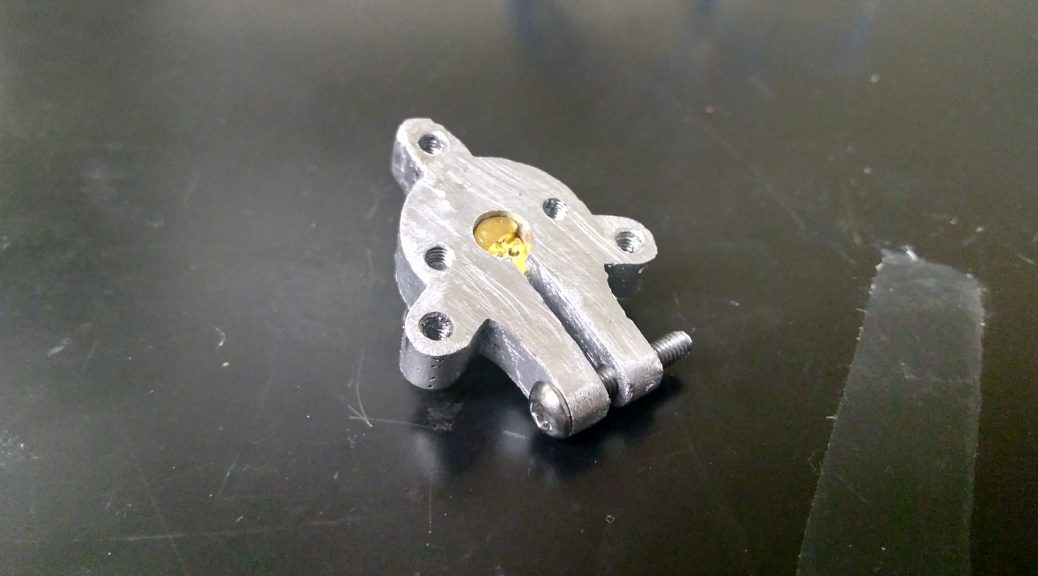 I began this week by solving all the problems with the user interface. I fixed a short that was causing it to not work, I wired the lcd backlight directly to 5v and ground, and I attached all the wires of the VGA cable. The UI is now finished.

I focused on the laser this week, I began by creating a holder for the laser diode that will connect to the heat sink. 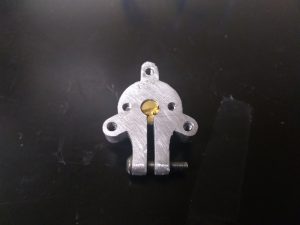 This will allow us to have optics very close to the diode, which may be required for focusing it, which wasn’t possible with the heatsink we were using before. The “clamp” as i call it, was designed in Fusion360, 3d printed in castable resin in the school’s Form 2 printer, and cast in aluminum. 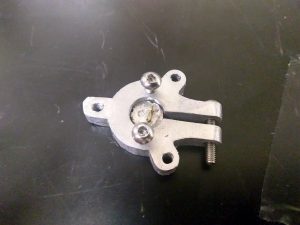 After this was done I added the TTL laser control circuit. 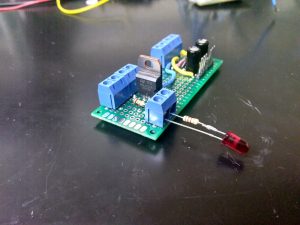 This circuit utilizes an IRF520 Mosfet controlled by a PWM pin on the Arduino. I added the power control to the arduino program. I mapped the 0-100% duty cycle, controlled witht the UI, to the 0-255 value of the PWM pin.

The end is in sight!

This week I focused on soldering the electronics together. 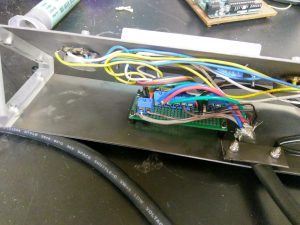 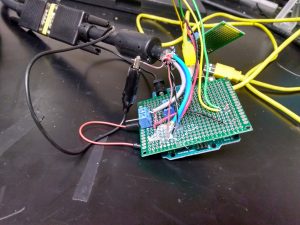 I also worked on connecting the UI to the arduino with a VGA cable. Currently there is a short-circuit somewhere on the UI which I am working on fixing. 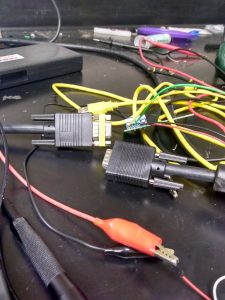 This week I plan to focus on the laser.

This week I redid my program and made it shorter. END_OF_DOCUMENT_TOKEN_TO_BE_REPLACED