While assisting Matthew this week, I helped him to filter through his extensive GPS programming. We’ve eliminated a large amount of code by deleting copious amounts of serial prints. It’s shortened the program considerably and made it perform much quicker.

Now, while the GPS is “working”, it still has a number of problems, namely in accuracy, among other bugs in the program. 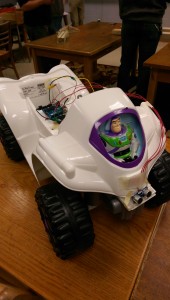 My own side project, with Noah, has been thinking of some logical, and simple, way to mount two sonar sensors on the front of the car. Of the two popular ideas, one consists of a face-plate that we can simply screw to the front of the car. And its angled face will host the two sensors. Like this: 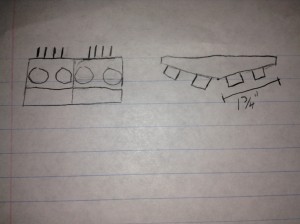 The suggestion from the Ag room, was an angled metal bracket which we could mount into the space where Buzz currently sits.