During the first few days of the week, I continued my work with the arm, and now it is able to use parametric equations to draw shapes.  The prototype arm can now draw both X’s and O’s at a given location and size.  The video below shows the arm drawing an O on the board, and many previous test O’s can be seen as well.

At the moment, since the current arm is only a prototype, it is unable to lift the marker off the paper.  That is why it makes lines as it moves into position to draw the O.  After the arm could draw both shapes, I began drawing a new version using Easel, an online design program.  With this version I hope to make small improvements over the last one regarding size and layout.  Most importantly, however, it will be able to hold the marker up until it needs to draw something, then put it down to draw. 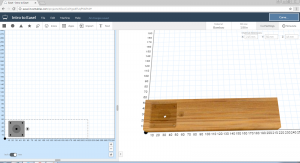