Definitely not in Kansas anymore. Since getting the mount we have made so much progress. We have been able to get the ears mounted and the eyes have been stuck on. Although our original plan was to be able to make the eyes blink, we have realized that it will not be possible so we have just taken out the fifth servo motor. The head with the continuous motion servo has been working very well and we have had no recent issues with it. As far as the tail is concerned it is still going pretty good the next step for it is to get an actual deer tail mounted on the back half of the deer. The ears gave us a good bit of issues. The first thing that was happening was a lot of jittering and twitching and when we realized it was actually a faulty servo we put a new servo motor in. Then after we put the new servo in we were still having issues, like when we would turn it on one ear would go up and the other would go down which is obviously not what we wanted. 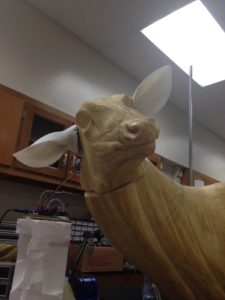 Gavyn and I figured out that it was an issue with the voltage and also a few things in our code had to be touched up. Mostly in the function that tells the ears to do opposite motions so that it goes the same way since they are on opposite sides of the head. After getting all of that fixed up we got the ears doing what we wanted them to do.  We have finally now gotten everything going the way it should and we are just in awe of how great it looks and how much progress we have made. Gavyn and I have started working on putting the actual “mother board” per say. He has done a lot of the soldering and we are nearing the time to put it all inside the deer and see how it all works out.

We have finally got a deer in our hands… well half a deer that is. It was donated by a local taxidermist Terry’s Taxidermy. This is very exciting because we can now start to attach things to the deer as well as make the head turn. We have named the deer “John Doe” as a literary and figurative joke about it being a deer and a blank one at that. 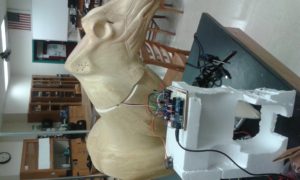 END_OF_DOCUMENT_TOKEN_TO_BE_REPLACED

In the past weeks Gavyn and I have perfected the servos. We started to manufacture parts. Currently we have the ears and tail built and are working on a design for the eyes and head. Currently we have the continuous servo on a timer going back and forth which will rotate the head, the we have two micro servos one for each ear that flick when a button is pressed and at the same time we have a tail that moves side to side. 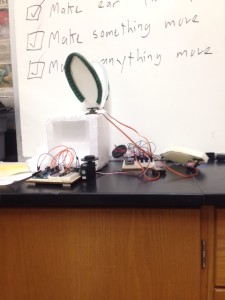 END_OF_DOCUMENT_TOKEN_TO_BE_REPLACED

We were in need of a prototype that moves in a certain motion that is needed for the deer. We then developed a small contraption out of small spindles of wood that holds a movable part that moves with a servo.  END_OF_DOCUMENT_TOKEN_TO_BE_REPLACED

Coding for the servos was not going well as we started to run into many problems. The certain codes we used didn’t do what we wanted. END_OF_DOCUMENT_TOKEN_TO_BE_REPLACED

This is an exciting time to be part of the deer team. We have made great strides once i got the Xbees to “talk” to each other. END_OF_DOCUMENT_TOKEN_TO_BE_REPLACED

For a while, Gavyn and I were working on a way to get debouncing to work because the buttons would register twice. It was taking very long and absolutely nothing was working. END_OF_DOCUMENT_TOKEN_TO_BE_REPLACED

This week in the few days I had I started doing some more advanced stuff with my servo motor. I was able to smoothly make it move from 0 to 160 degrees then I decided to also make it go from 160 back to 0 on a loop so that it doesn’t stop going back and forth. I am currently working on a simple robotic arm to attach to the motor so that I can move the arm from left to right and I will hopefully be putting linkage in next week so that instead of just going side to side i can make a joint so that I can move the arm up and down.

With the soldering process of the adapters complete, I decided to fit the Xbees into them and to my surprise, they didn’t fit.  END_OF_DOCUMENT_TOKEN_TO_BE_REPLACED