This week I focused on getting the servos to cooperate with each other. I looked into a few things possibly causing the issue. One possible fix was to increase the baud rate between the servo controller and arduino. This seemed to really help, but the servos are still not perfect. I also looked at setting a “multitarget” which allows me to streamline 8 lines and communications into one. It didn’t seem to help very much at all. The last thing that I have yet to look at is writing scripts in the maestro code. It would have a learning curve, but it would allow me to bypass the communication which I still believe is where the problem lies. I will work on that next week. 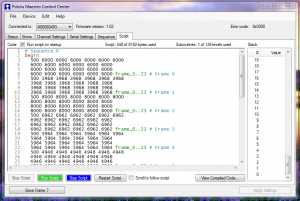 This week I sat down and wrote out a flow chart of how my program should work exactly. Then I took that and wrote it into code on a piece of paper so I can type it right up. 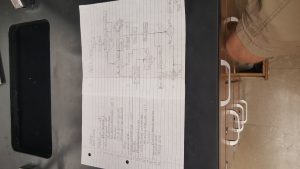 This week I finished building the user interface and also finished the programming for it. 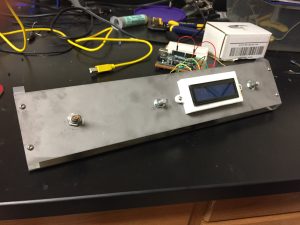 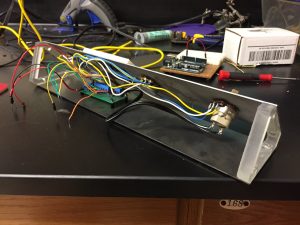 I also finished one of the servo mounts and hot glued everything together for a temporary test of the movements and code.

I Finished soldering a small circuit for the servos. 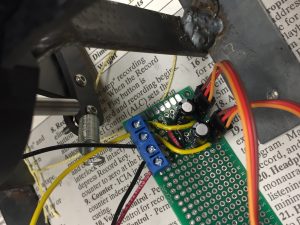 Next week I plan to permanently wire the UI to the “shield” for the arduino, build the mount for the second motor, and permanently mount the motors and mirror assembly in the box.

I have finished my locking mechanism and mounted it to my box. To mount my locking mechanism to my box I drilled holes in my pieces then tapped the holes. To transfer the hole locations from the lock pieces to the box I made a paper template of the pieces then poked holes in the paper where the hole in the lock mechanisms were. To mount the servo I hot glued it on which is only temporary. 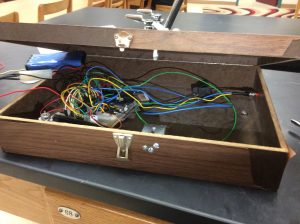 This week, I built a lot of the physical parts for this project.

First, I printed the frame for the mirrors in Formlabs Clear resin, and I assembled all the mirror components together. After Testing I plan to epoxy the plastic parts together for added strength. I also constructed a steel U-shaped piece that holds the mirror assembly up of the ground. 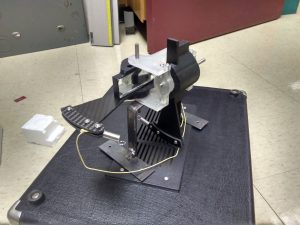 Second, I deconstructed an old classroom tape recorder to use as a box for this project. 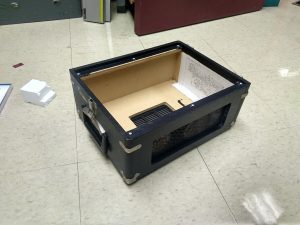 Third, I began to construct the user interface (UI). I drilled holes into 1.5mm steel sheet, and used a dremel to cut out the window for the LCD. I sandblasted the panels and printed a frame to hold the LCD. I also assembled a small circuit board that reduces the number of input/output wires from 14 to 8. The wires are pos, neg, pot 1, 2, 3, and LCD 1, 2, 3. I am using an LCD “backpack” to reduce the amount of wires and space used. 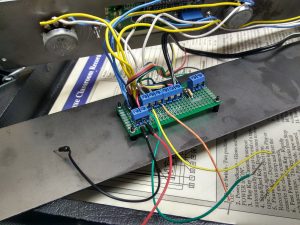 Fourth, and last, I began to assemble the hardware. I acquired an arduino, I began to make an arduino “shield” and a circuit board for the servo wires. A major goal for this project is to have all of the parts to be modular so that I can easily change out parts or in the future, it would be easy for someone to cannibalize the subsystems of this project. 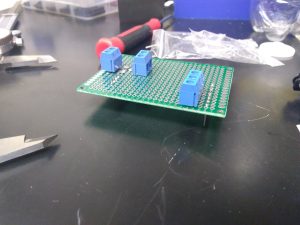 Next week I will be constructing the servo motor mounts and the spools for pulling the string. I hope to have the mirrors operational by the end of the week, April 27.

And then the laser…

This week I created a body and I created another two legs. I have been working on making all four legs work at once. The first thing I had to do was translate the math for a leg on the left side of the body to the right side. I got that done in about one day, but there are a few bugs that need worked out. I can’t run more than two legs at once. When I do, the legs jitter really badly or point straight back as if the point it is trying to go to is a few inches too far back. I had no success on making them coordinate this week, and I do have a couple of possible explanations. I might need to change some of my power setups. 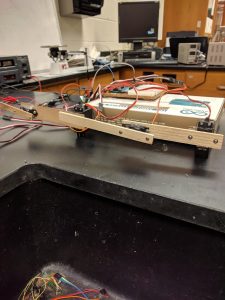 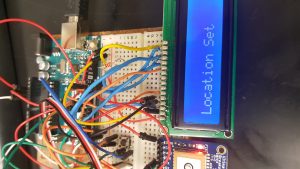 I have gotten my box and got my lock mechanism working. I also added a 5v regulator to provide more stable power to everything than the arduino.  Now all I need to do is mount everything to my box! 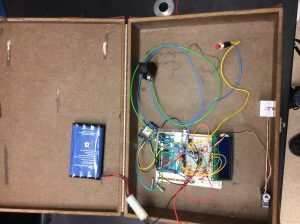 This week I received a LSM303 digital compass to work with. This compass has an accelerometer implemented in it making it possible to compensate for tilt. I spent this week learning about this compass and having it give me its heading which I will use. I started coding in the equations needed to apply tilt compensation and calibration. Without tilt compensation the compass will give very inaccurate heading readings whenever it is not level which would be a huge problem. Next week I will implement tilt compensation amd calibrate the compass. My next goal then will be to use my new accurate heading readings to compare to the destination heading and have the car fix itself to drive to the destination.

This week I finished constructing the mirror assemblies for the project. 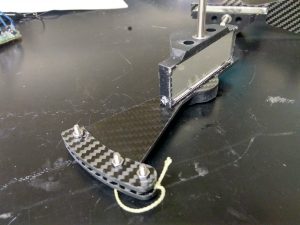 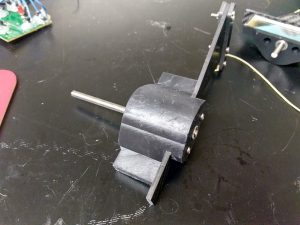 Now with the mirror assemblies done I have to build the structure that holds them in the right orientation. I initially thought about milling this structure out of aluminium, but the time and effort involved are not worth the outcome, milling it out of aluminium would be overkill. So I decided to print it on my schools form 2 printer. 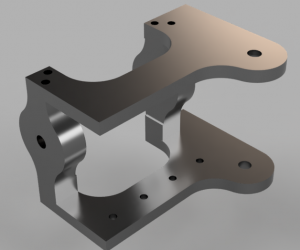 The frame is four parts that screw together. After this I will build the platform that hold all of the components, and begin assembling the electronics.